Helping You to Thrive Online

Learn How to Use Social Media Like a Pro

“You should use social media to promote yourself as an actor.”

An advice you may have heard from your agent, a casting director or fellow actors, right? But you probably aren’t sure where to start, which platforms to choose, and how to make the most out of the time you spend there. I feel ya!

Many actors get frustrated about the use of social media, which is why I created Social Media for Actors Workshop to help you get a foundation of knowledge, so you can confidently promote yourself like a pro.

I WANT TO BECOME A PRO

What are you going to learn?

Learn about which platforms to choose and how. Also learn about the importance of goal setting and what influence does your creative space have on your content creation process.

Need to create graphics for your social media posts, on-brand covers or a press kit? Overwhelmed by trying to keep up with show business news? Learn about tools and resources that will make your life way simpler.

So you’ve created some content, but how do you get people to watch it? Learn how to create a community of fans that support you along your journey and how to effectively collaborate with fellow creators.

Learn how to promote yourself and your projects without feeling icky, how to persevere in your efforts and about tools that are going to help you stay active on social media even when you can’t be.

When do I need to pay?

You are advised to pay as soon as you receive payment details from me (which you’ll get after filling out the Workshop Application Form below). After receiving a payment from you, your application will be complete and your place in workshop reserved.

How can I pay for the workshop?

Can I pay in cash upon arrival to the workshop?

Sorry but that will not be possible. However I offer several convenient payment methods you can choose from.

Can I get a refund if I can't attend?

Refunds are not given once the payment is made. Payments are not transferable between course dates.

Please take the investment and commitment to your education as seriously as your auditioning and work.

What are other options of working with you?

I’m glad you asked! If you want to learn about social media but can’t attend the workshop or classroom enviroment doesn’t work for you well, I can offer you private coaching sessions. You can find out all about my coaching offers here.

Please answer these three questions with your application:

What do you want to learn the most about when it comes to social media?

What is your current biggest issue with social media?

What is your current level of knowledge when it comes to social media?
(Beginner – just starting to use it, Intermediate – I have used it more or less actively for some time now, Advanced – I’m very active, have a significant following and I’m even creating my own content)

Also include links to your social media profiles, please. By answering these questions and sending me your profiles you’ll help me help you by adjusting the curriculum of the workshop according to your needs.

WHY STUDY WITH ME?

Hi, I’m Lenka and I started out blogging about my journey to London to study acting in English back in 2011.

My story of a slightly unconventional approach to hacking my acting education while being broke caught the attention of sites like Huffington Post and A Younger Theatre. My blog Acting Abroad was nominated for a Shorty Award and in Bab.la’s TOP International Blogs.

I also started teaching actors how to use social media in between my classes and shifts at the Actors Centre in London. I realized there are so many talented people who would like to learn how to promote themselves on social media, but don’t know how. I’ve been helping them ever since.

Between acting work, I started producing videos on YouTube, which led to a job offer at Stario, a digital agency, and later I landed a job at SYMBIO, an integrated advertising agency.

Combining my experience in the show business and online marketing, I’m helping actors and creators all over the world to thrive on social media.

Since 2017, I’ve been a proud SMFA-U Prof. The lovely Bonnie Gillespie approached me to create a course about social media and I’ve been coaching actors since then.

Would you like to get a taste of what you’ll learn at the workshop?

Get a free chapter of my e-Book Social Media for Actors. 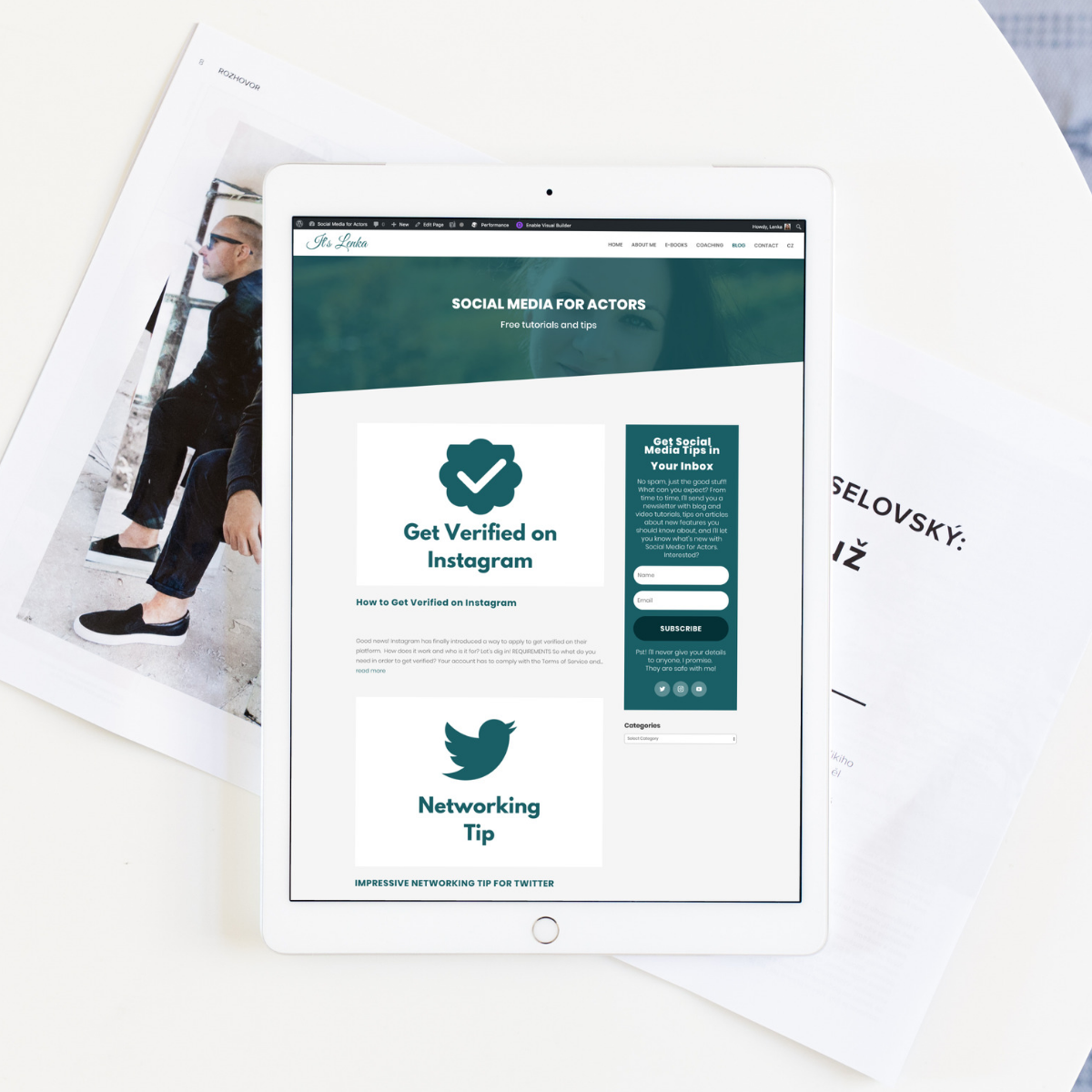 My articles on Backstage 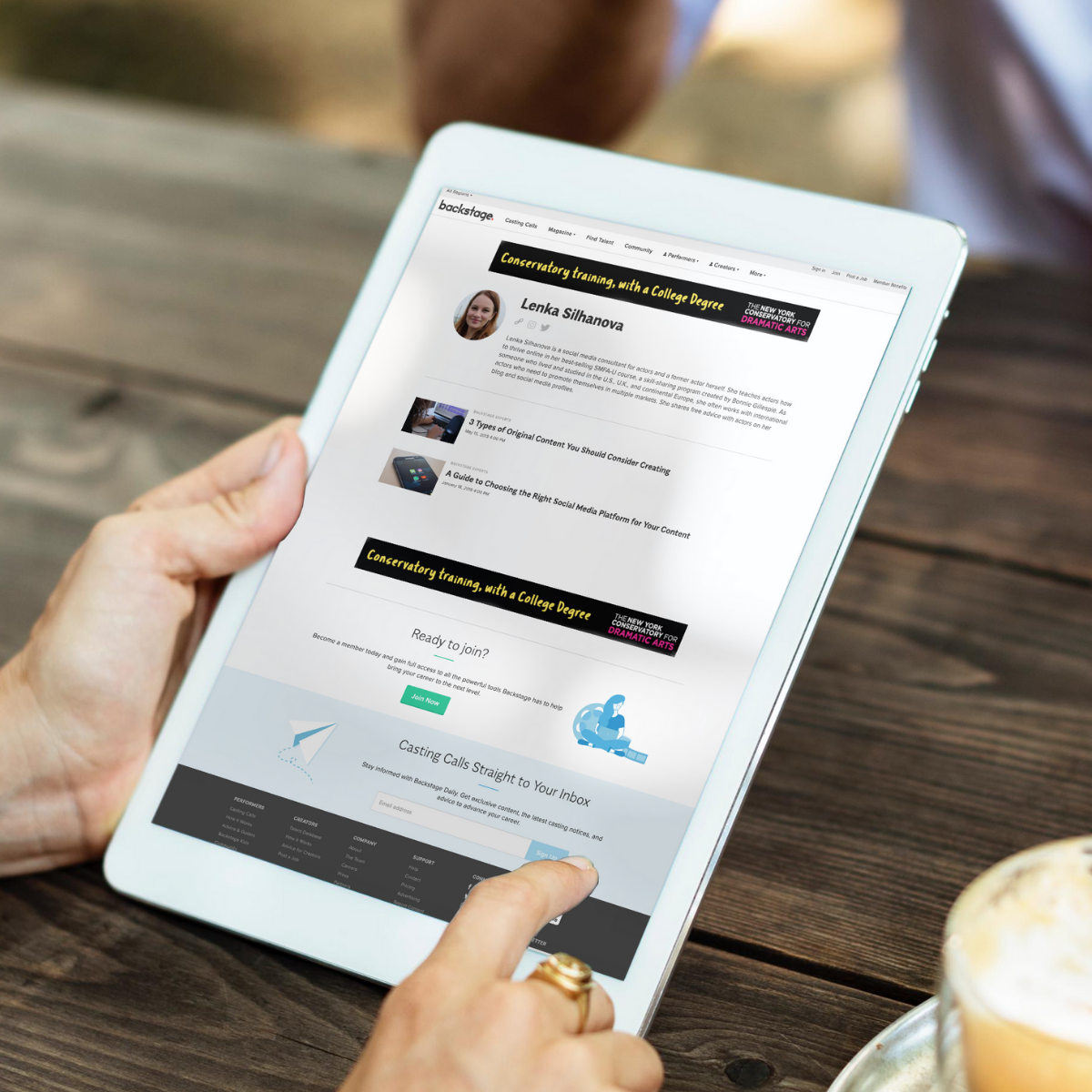